Casa Circular is a building designed for circular economy and inspired by cradle to cradle design framework. There are many differences between this type of construction and traditional ones, but what definitely differentiates these models is the question: “what’s next?”. For that, all used resources are able to circulate safely and healthy for nature and humans.

Furthermore, in circular economy, buildings are understood as material banks. For that, each material should be able to be reinserted in further cycles. They can be used for other constructions (assembly and disassembly), for the building’s enlargements or reductions, or they can be even transformed into new products.

Casa Circular first prototype is an artist’s atelier of 30m2. It was assembled in São Paulo city, Brazil. While the architects see a long way for the Brazilian industry to produce building materials that completely meet the values of circular design, they believe continuous improvements seem to be necessary and urgent. Hence, the atelier has been seen as a starting point. They have searched materials and systems currently available in the Brazilian market that would better attend the presented criteria. They decided to use woodframe panels and modular and prefabricated components for the construction technique. At the same time they follow the criteria described, they allow the buildings’ customization for further uses.

In addition, they adopted the use of maximum natural lighting and fresh air  extensively. Also, they designed vertical openings (doors and windows) along with zeniths (sheds/light tubes in the ceiling) for indirect lighting. These openings also function as a chimney system for hot air, which naturally rises by the thermodynamic arrangement of the building. As a result, this system creates a kind of natural air conditioning. Rainwater is harvested and the effluent is treated through a banana tree circle, planted next to the building. The banana tree circle itself filters the water again, which can safely return to the system.

The strong word for circular design is “recyclable” rather than “recycled.” Still, they applied reused materials in the building. Therefore, the foundation of the house is made of used tires and gravel, and the external closures are made of wood, which was firstly used as concrete molds in another construction site.

Moreover, in this type of construction, planning is essential for continuous optimization of the resources involved. There were 3 months for the design and planning phase, 15 days for pre-production and only 10 days for assembly the building. The construction was fast, with clear deadlines and pre-defined cost. As a result, there was no waste produced in-loco, and consequently no need for waste container. Besides, the building can be disassembled and reassembled in another location.

This project is the result of of the architects’ continuous search for an alternative to the way we have inhabited the planet. The exercise was to think constructions beyond their form and function, understanding them as places that should be healthy, circular and effective. For them, this is a path to a future of abundance rather than scarcity.

See what media is saying about us: 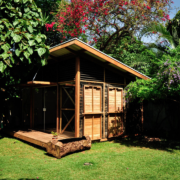 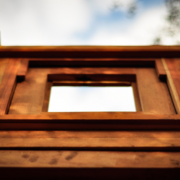 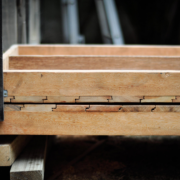 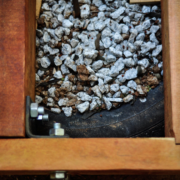 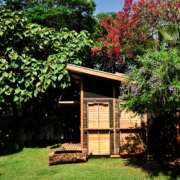 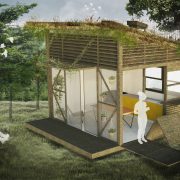 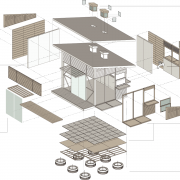 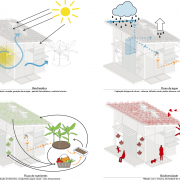 water, energy, nutrients cycles. biodiversity and health are also concerns of the design. 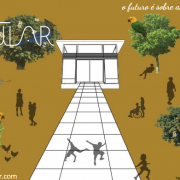 Future is about abundance